Beautiful blue sky and the heat already building when I woke up this morning.  And since this was the day that I was getting back onto the tennis court, this is how I felt:

So off I went in my van to the Manolo Santana club which is, as you can see, in a completely beautiful setting.   It was quite strange to go in there and find everyone in masks (including Juan, the coach that I play with, when he first arrived – actually the masks that both he and the receptionist were wearing were so big that I couldn’t really understand a thing they said, but, generally, I think we were all very pleased to see each other!), and then once we got on court and the masks came off, it was almost an emotional moment (even for him, a tough brute!).

The tennis itself was just fantastic – I was surprised that it was almost as if I haven’t been away (as was he!!), but I suspect that I am going to feel it tomorrow.   I can barely explain the sheer joy of it – we had some rallies at the end where we both ended up laughing just from the pleasure of walloping a ball about again.   Loved it!   When we finished, though, he reminded me that we cannot walk outside the court without a mask on, which was a bit of a ‘back to reality moment’ (plus not very nice with sweat pouring down my face and hardly able to breath at all at that point!)… but only a small thing!

One of my friends wrote on my blog yesterday that he could feel how excited we were to be sort of back to normal and I am happy that it came across that way, as I think it may not have been quite such an emotional time for those of you in countries where it has been a bit less restricted.  A couple of our friends here have said that they almost became agoraphobic after the first few weeks’ lockdown, and I know what they mean – that Saturday, when we could finally run outside, we were both quite nervous when we set off without really knowing why, and almost euphoric once we did it, and I definitely felt that way yesterday, when I went to get the car  – we have all got so used to just being in our house and only seeing each other that once we could go out, we almost didn’t want to.   Now, we continually say to each other how we are noticing and appreciating things that we never noticed or appreciated before – for example, I rarely take photos, but in the last few weeks I have been taking loads of them – all the wonderful flowers around the Pueblo, the views out to the mountain, the colour of the sky…. I can’t even believe that I am actually saying these things as the old me would have thought it was a bit ‘soppy’!  Here are a few of my favourites from the last nine weeks: 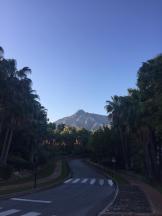 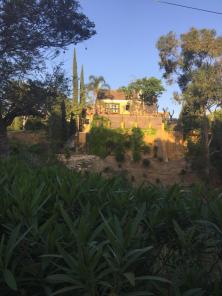 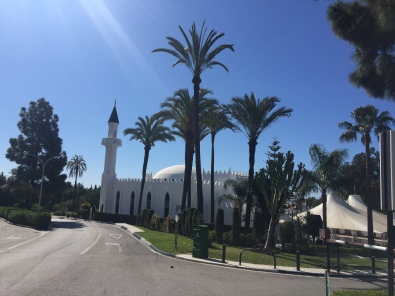 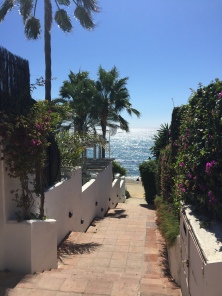 So, anyway, once I got back from tennis, we were straight into our now normal routine of a couple of hours sunbathing by the big pool, and then home for lunch, some work, some more sunbathing and then planning the evening (even that is funny, since we have never really had to plan it before, as there was nothing, actually, to do (other than eat and try to avoid drinking!) – which again, tonight, involves meeting up with an old friend (and that will involve drinking! – and how nice it was last night, too, to be sitting outside in a garden, and chatting with other people!  The problem is not the need to be 2 metres apart – that is nothing compared to only seeing people through a window or on Facetime!), but more that we only really converse about the bloody virus and its implications… we really need some other things to get going soon in order to have something else to talk about!) and then dinner at home and a late night walk again.   We are pacing ourselves on the ‘excitement front’ – dinner out in a restaurant will be a bit later in the week, otherwise it might just be too much to cope with!!

Before all that, though, I really must get to my news and social media watching, and a bit of what is now a daily practice – chasing airlines for refunds (and failing miserably – 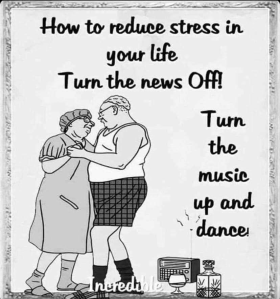 please do be careful if you are thinking to book something, as I said yesterday (stick to Ryanair!) this is going to be the next big scam of the Covid-19 period….).  Oof, just thinking about all that… I don’t know… maybe a day off it all would do me good… perhaps a spot of dancing instead…!!